When we think of the destruction wreaked by war, we usually think of the human lives lost, the loss of infrastructure, such as buildings, roads, and rail lines, maybe even the environmental cost. But we don’t often consider the destruction of art or historical artifacts.The film is worth seeing, beyond its enjoyment, for the information it provides and the questions it raises. Too few of us know about this fascinating chapter in the war.

I have noted with grave concern that for many years now Lego has steadily increased its production of violent toys, so the idea of sitting through a 100-minute commercial for Lego toys was not remotely appealing. But based on the current popularity of animated films and the rave reviews I was reading, it seemed clear to me that The Lego Movie was destined to be one of the highest grossing films of 2014, so I joined a sold-out throng of eight-year-olds on opening night.What do you call a film that beautifully challenges the myth of redemptive violence so prevalent in […]

As followers of Christ, we are called to approach wrongdoing through the lens of justice and mercy.

The Super Bowl was practically over before the coin toss this year. Unless you were a Denver fan hoping that your team would soon show up, there wasn’t much to do but eat good food and watch the commercials.Cheerios gets my nod for the best ad from this Super Bowl, not because it was the best-produced ad of the night, but because they brought back an interracial family. 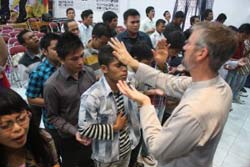 Several years ago Paulus Hartono, a Mennonite pastor in Surakarta, Indonesia heard rumors that a radical wing of Muslim activists had announced their intention to blow up a local radio station. It was operated by a moderate Islamic group. The one who bore the news urged him to do something to prevent such violence. After seeking God’s direction and protection, Pastor Paulus took the courageous step of going to visit the head of the radical group, a telecommunications specialist. By God’s grace, he was able to persuade the leader to forsake his violent plans, thus earning him the reputation of […]

One concern many families of faith share is how to pass on their faith to their children. At least one sociologist has made this a major project in his scholarly career. It turns out that one of the most important factors in children adopting religion is the warmth of the father—or if not the father, then the grandfather.The highest generational transmission of religion from generation to generation occurs in families with a high degree of warmth—particularly if the father is perceived as warm and close.”

A Call for Justice in Haiti

Haiti faces a deeply rooted problem, which pre-dates the 2010 earthquake, of systemic economic injustice and inequality.

Director Alexander Payne’s movies haven’t always resonated with me. Though Payne has a penchant for finding the humor in selfish and complex characters, he doesn’t usually elevate them into sympathetic ones.Witty dialogue, a melancholy ambience, and eccentric people that struggle to communicate effectively—the characters in Nebraska are more emotionally realized than in director Alexander Payne’s previous films.

Hope in a weary world

Hope begins with recognizing that the way things are is not how they should be.

Spike Jones’ sci-fi-romantic-comedy-drama (there’s a mouthful) Her is a captivating film set in Los Angeles in the near future. Despite, or maybe because of, its quirky premise of a man falling in love with his operating system, it raises profound philosophical questions about relationships and technology, about reality, love and death.All the philosophical discussion in the film can make it sound cerebral, and it’s certainly intelligent, but this is a very emotional film.