Caring for self is a must

In some circles, the term “self-care” is so overused as to elicit groans. In other places, the most likely response is, “What’s that?” In the hospital where I work as a chaplain, we talk with nurses, doctors and other staff about caring for yourself while caring for others. We’ve used the book Trauma Stewardship as a resource; its title describes the particular challenge of careers that bring one in close contact with suffering. With so many goals for living well, we may find ourselves always one step behind where we want to be. While self-care sounds warm and fuzzy, […]

Responding to the Syria crisis

By Katherine Crosby As civil war in Syria continues, the accompanying humanitarian crisis continues to grow. More than half of Syria’s population has either left the country to seek safety or remains displaced within Syrian borders. Those who attempt the journey abroad face transportation controlled by a $26 billion smuggling industry, spending large sums of money on a dangerous journey toward many unknowns. Upon their arrival, those seeking asylum often are met by a complete lack of services to assist them in the resettlement process and encounter systems that make it difficult to connect with relatives or create sustainable livelihoods. […]

Nelly (Nina Hoss), a German nightclub singer, but also a Jew and a death camp survivor, enters occupied Berlin at the beginning of Phoenix to have her face reconstructed after the disfiguring caused by a bullet wound. She emerges with a new face, one at least different enough that her husband, Johnny (Ronald Zehrfeld), doesn’t recognize her. She discovers that she now has a claim to considerable wealth because all of her family has been killed in the camps. Johnny, believing she is dead, wants to get some of this money. Nelly, instead of claiming to be herself, enters into […]

How Do You See the Face of God?

Stefan Waligur is a Christian contemplative in the 21st century who composes, sings, and leads musical meetings or retreats with Taizé-type music and sensibility. When he starts a song, he calls out a line and the group is asked to sing it back in response, and then keeps it running and running and running—in a very good way—until he senses it is time to wrap it up. He has a beautiful voice and a self-deprecating sense of humor that engages and hooks a congregation or group almost without their knowing it. Kind of like a pied piper. I see pain, […] 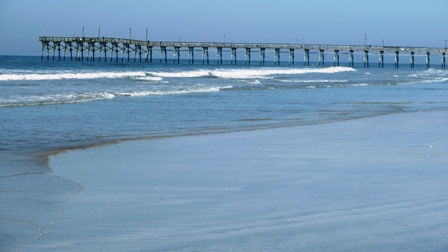 Angels in the Outer Banks

Editor’s Note: Jodi Nisly Hertzler writes occasionally for Another Way and is a college counselor and tutor. Jodi and her husband have three children. Twenty years ago, I married my college sweetheart. Four days later I nearly lost him. I worried about whether he was okay but kept telling myself that he was a good swimmer and would be fine. We’d gone to the Outer Banks of North Carolina for our honeymoon, and were staying in an area that was fairly remote. Beautiful, undeveloped beaches. No lifeguards. We were a cliché: young and in love, blissfully spending our days on the beach and […]

Lakka Benti, Domestic Policy Intern, Mennonite Central Committee U.S. Washington Office In 2008, the Bush administration started a program called Secure Communities by which the fingerprints of someone booked into a local jail were shared with federal immigration databases to determine if the person was an undocumented immigrant. Immigration authorities could then request a “detainer” or “hold” be placed on the person until Immigration and Customs Enforcement (ICE) officials could pick them up and put them into deportation proceedings. The program was expanded under President Obama and led to the deportation of tens of thousands of immigrants. (In 2014, the […]

Back to the Future

Last Wednesday, October 21, 2015, I picked up my phone and hailed Siri, iPhone users’ favorite personal assistant, confidant, and fake friend. I said, “Happy Back to the Future Day, Siri.” She responded by saying, “Be careful who you date today, or you could start disappearing from photos,” a reference to the first Back to the Future movie. I wished her Happy Back to the Future Day probably 20 times, and received 10 original answers, all referencing the 1985 film and its two sequels. She said “Great Scott,” a favorite saying of character Doc Brown. She asked if I wanted […]

99 Homes and Beasts of No Nation

Movie intensity has ratcheted tighter in recent weeks as Oscar time approaches. Since Hollywood leans heavily on franchising and remakes to make bank, we’re lucky there are still incentives to make movies that balance the bombast, films with no chance of winding up on novelty T-shirts. Two recent releases—99 Homes and Beasts of No Nation—are classic award-season fodder, though Homes is a quiet film and will probably not get much attention come February. However, both topics (the recent foreclosure crisis and child soldiering in Africa) are the kind of thing we grow numb to in the news, and sometimes it […]

Is Your Faith Wild?

This season of the year always brings to mind one of the most frightful Halloween nights my children ever experienced. I have to confess that the idea of a “wild” or “untamed God” is a little unnerving. We traveled to New York City so I could attend a conference for syndicated columnists, and my husband gamely went along to take our children to see the sights, even though the two oldest were only ages five and a half and three and a half. (Since our youngest was only 9 months old, we left her with a wonderful couple from our […]

By Jenn Wiebe, director of MCC Canada’s Ottawa Office We live in a context of growing fear—fear about terrorism. Few terms have so furtively made their way into our daily discourse. Yet while the specter of terrorism has gained a sense of urgency in our homes, churches, and communities, most of us have only a vague impression of what it is. The term “terrorism” has been used in distinct ways throughout the centuries to describe a wide range of actions and actors. First popularized during the French Revolution (1793-94) when it was used (rather positively, I might add!) to describe the […]