The tragic list keeps growing: David McAtee, George Floyd, Michael Brown, Tamir Rice, Philando Castile, Breonna Taylor and more. All of them are African-Americans who were killed by police officers. The current nationwide protests have brought to the forefront pre-existing tensions between police departments and the communities they patrol, rooted in the long U.S. history of racism. 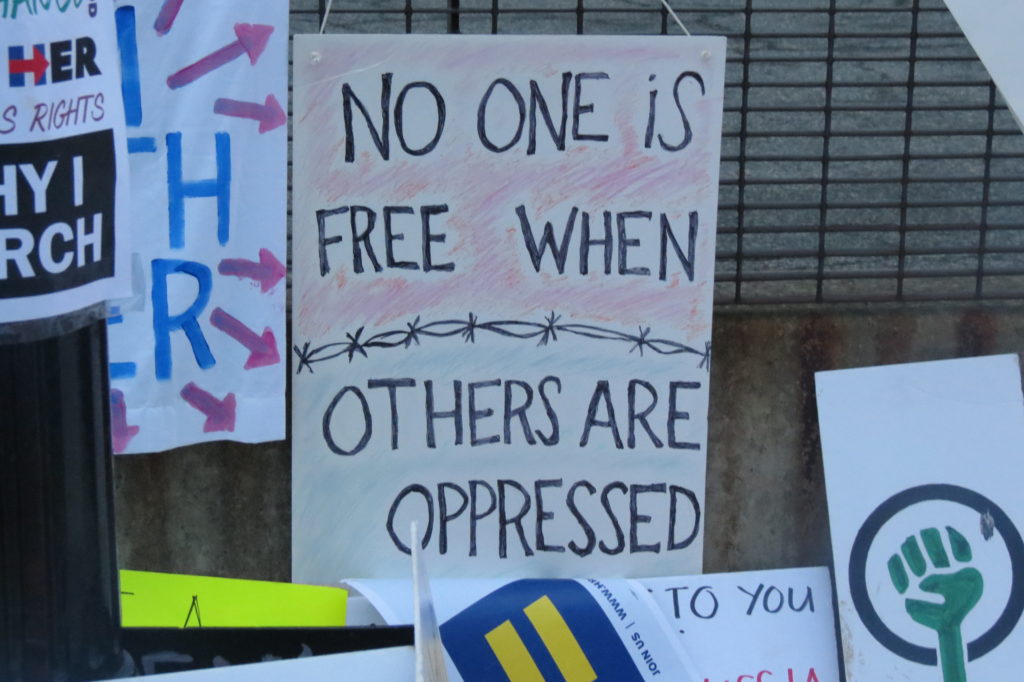 Poster outside of the White House. MCC photo/Cherelle M. Dessus

Major cities spend more on their police departments than they do on public health or economic development. The city of Los Angeles’ 2020-21 budget grants the police department $3.14 billion out of a $10.5 billion budget, much more than they invest in economic development ($30 million). Minneapolis, the city where George Floyd died, spends $193 million on policing and $31 million on affordable housing.

Aggressive tactics such as stop-and-frisk and “broken windows” policing, which focuses on lower-level offenses such as graffiti and vandalism in an effort to prevent more serious criminal activity, perpetuate the mass incarceration of people of color by increasing the police presence in communities of color. The  recent confrontations also bring to light the continued militarization of local police forces which the Trump administration has encouraged by easing restrictions on military gear being given to police departments.

Congress is discussing how to address the over-militarization of the police. Rep. Ayanna Pressley (D-Mass.) has introduced a resolution that condemns police brutality and racial profiling. Rep. Hakeem Jeffries (D-N.Y.) introduced a bill in 2015 after the death of Eric Garner, and reintroduced it in 2019, that would designate a chokehold as a civil rights violation.

Sen. Brian Schatz (D-Hawaii) plans to introduce an amendment to discontinue the program that transfers military weaponry to local police departments. Similar legislation, the Stop Militarizing Law Enforcement Act (H.R. 1714) has been introduced in the House.

The passage of legislation such as this, combined with granting more funding to affordable housing, job development, and community-based violence prevention programs, would make all our communities safer, not just some.

We are in a time of lament. The Psalmist writes, “My God, my God, why have you forsaken me? Why are you so far from helping me, from the words of my groaning? O my God, I cry by day, but you do not answer; and by night, but find no rest” (Psalm 22:1-2). Let us take this time to lament but may our lamenting lead to justice and safer communities for all.