In 2012 the United Nations predicted that Gaza would be unlivable by the year 2020. Many of Gaza’s two million residents say the conditions have already been unlivable for years.

Gaza, a small sliver of land along the Mediterranean coast, has been under a suffocating siege imposed by the Israeli government in 2007. That year the Israeli government tightened already-existing restrictions in response to the Palestinian party, Hamas, becoming the governing power in Gaza. Hamas is classified as a terrorist organization by the U.S. and Israel. Egypt also restricts the regular movement of people and goods at the border crossing with Gaza that it controls, making narrow exceptions for some categories of travelers.

The blockade has had devastating consequences for Gaza’s civilians. People need to get permission from the Israeli government to leave Gaza for medical care or work. The Israeli government also determines what goods can enter and exit Gaza. Many items, such as basic construction materials necessary to rebuild homes or repair water systems, are prohibited as Israel says they could be used for military purposes. 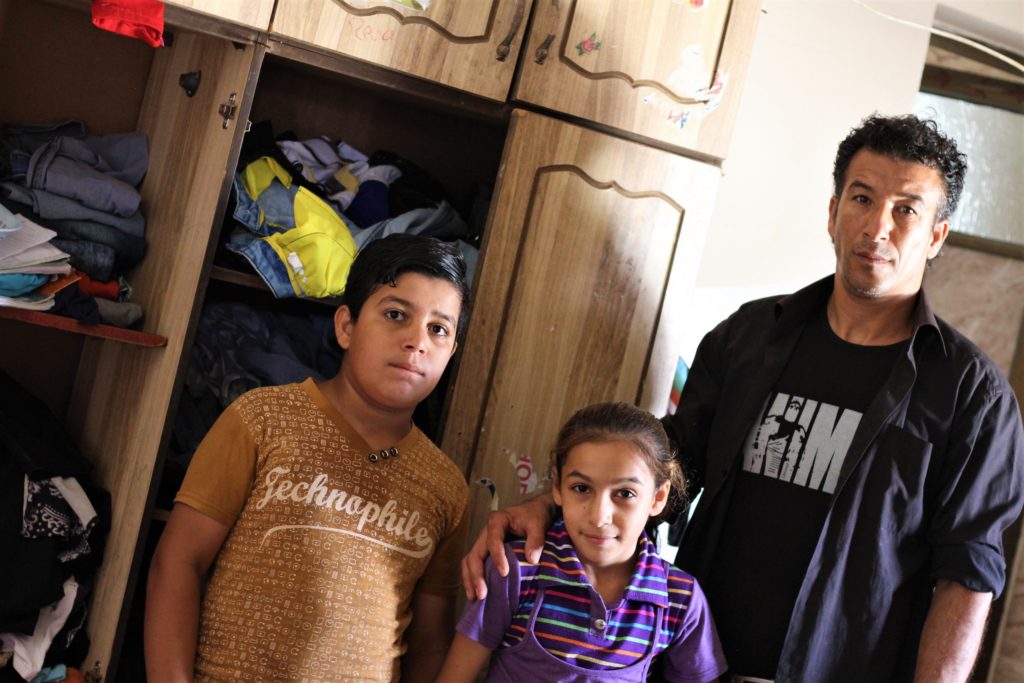 Taha Mqat stands with his son and daughter in their home in Gaza, Palestine. Read more of the family’s story. MCC photo/Mostafa Al Naffar.

As a result, Gaza’s economy is in shambles. Nearly half (45 percent) of Gazans are unemployed. Ninety-seven percent of Gaza’s water is unsafe to drink. Access to electricity is irregular, impacting medical care, businesses and the ability of students to do their homework in the evening.

Mennonite Central Committee supports organizations in Gaza that provide children’s programs, vocational training, and food security projects. On my visits to Gaza, staff of these organizations have described the bittersweet reality: Gazans, they say, are in love with life and want to experience it to the full. Their hospitality and warmth to me were unmistakable. But the blockade has led many to lose hope and put Gaza on the brink of disaster.

The U.S. government is complicit in this situation, with its strong support for the restrictive policies of the Israeli government. In 2018 the White House cut all funding to the United Nations agency that serves Palestinian refugees, putting emergency food assistance, education and other vital programs in Gaza at risk.

On February 20, 35 members of the House of Representatives wrote to Secretary Pompeo, asking that the U.S. restore humanitarian assistance to Gaza and support an end to the blockade. This is an important step and now we need even more voices in Congress to call for an end to this inhumane policy.

Please support MCC’s work in Gaza and let your congressional representatives know that the siege is unacceptable and that all people, regardless of where they live, should be able to live with dignity and hope for a better future.