A look at military, national and public service

Congress formed the National Commission on Military, National and Public Service to study the issue, as well as ways to increase participation in service overall. The commission’s work is of keen interest to Anabaptist groups, who strongly value voluntary service and who oppose serving in the military.

In January 2019 the commission released interim recommendations. The commission interpreted service broadly, as a “personal commitment of time, energy, and talent to a mission that contributes to the public good by protecting the nation and its citizens, strengthening communities, or promoting the general social welfare.” This includes military and non-military service.

In June 2019 Mennonite Central Committee U.S. convened a meeting of various Anabaptist groups to consider and respond to the commission’s recommendations. The groups agreed to send a letter to the commission that included: opposition to a universal obligation to serve in the military; protections for conscientious objectors to war; the recommendation that women not be required to register with Selective Service; concern over the conflation of military service with service to one’s community; and concerns regarding military recruitment. 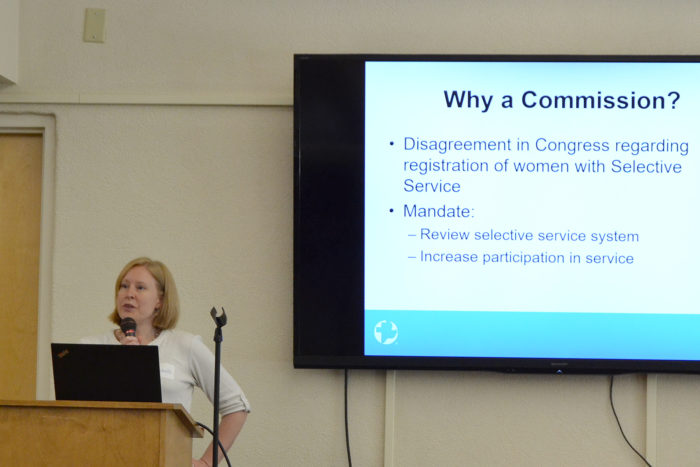 Rachelle Lyndaker Schlabach speaks at the June 2019 gathering of Anabaptist groups on the National Commission on Service. Credit: Cheryl Brumbaugh-Cayford/Church of the Brethren.

As of December 31, the commission has concluded the time for public comment. It is scheduled to release final recommendations to Congress in spring 2020. The MCC U.S. Washington Office will monitor what emerges from these conversations and continue to support the values of peace and voluntary service. As the letter stated, “In following Jesus, we serve in ways that build up, nurture, and encourage rather than destroy. Our opposition to war is not cowardice but an expression of Christ’s forgiving love as shown on the cross.”