The next chapter in the Christmas story

During this time of Advent, as millions of refugees face an uncertain future and thousands of asylum seekers wait to enter the United States, some communities are reaffirming their commitment to helping newcomers find safe homes.

On December 9, a Burleigh County Council hearing in North Dakota was standing room only as hundreds voiced their support for welcoming refugees. The council, which had been expected to vote against resettling any refugees next year, ultimately voted 3-2 in favor. The county of 95,000 people welcomed 24 refugees last year.

A new Trump administration policy is requiring states and localities to opt-in to the U.S. refugee resettlement program in order to continue to receive refugees in their communities.

In Utah, which has seen overwhelming bipartisan support for resettling refugees, Gov. Gary Herbert recently wrote, “We empathize deeply with individuals and groups who have been forced from their homes and we love giving them a new home and a new life,” adding that refugees have been an asset to Utah, not a liability. 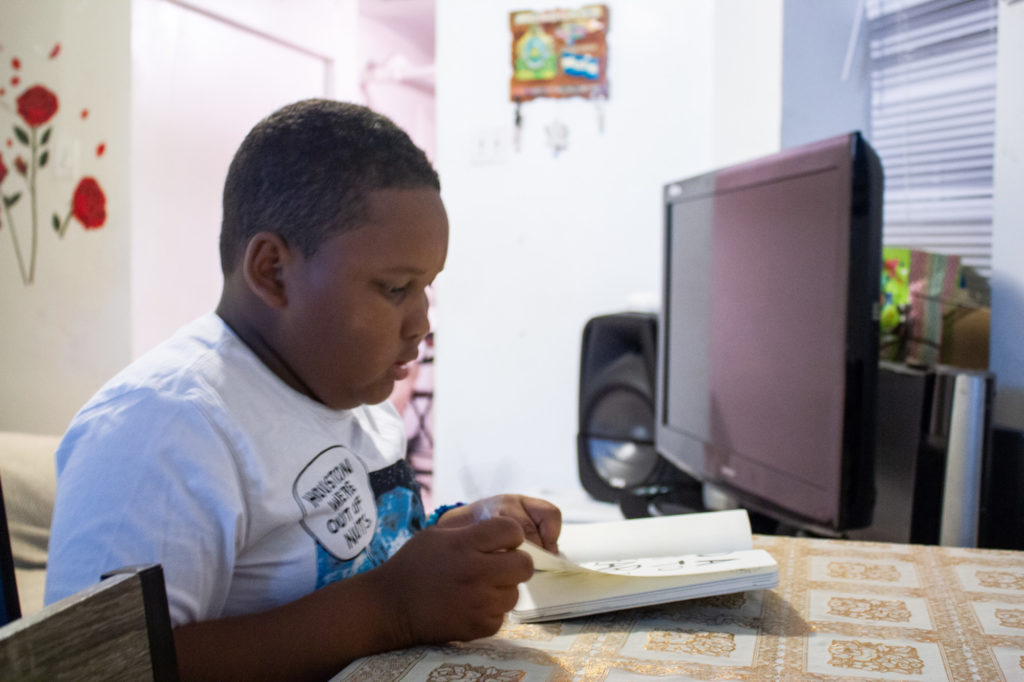 Silmer Sandoval, age 9, arrived in the United States from Honduras with his mother, Dayri Sambula, when he was 7 years old. They were fleeing political persecution in their home country. Now, Silmer and Dayri have achieved asylum status with the help of the New York Mennonite Immigration Program (NYMIP). MCC photo/Laura Pauls-Thomas.

Support for refugees in Utah comes from a need for new workers, an appreciation of diversity, and a network of well-funded support programs to help refugees successfully adjust to their new communities. Support also comes from members of the Mormon church remembering that their own ancestors fled persecution in the 19th century and allowing this history to infuse their current views on immigration.

Anabaptist history, too, is full of stories of families fleeing persecution and violence to find safety in a new land, many of them here in the U.S.

In the book of Matthew, immediately following the story of the birth of Jesus is the story of Jesus and his family fleeing the threat of violence and finding safety in Egypt. In today’s legal terms, Jesus’ family would likely be classified as “asylum seekers” rather than “refugees.”

Both terms describe people who flee violence or persecution. Refugee refers to a person who flees to a second country before either returning home, if conditions allow, or being resettled through the United Nations into a third country. An asylum seeker is someone who leaves their home country, moves to a second country and asks for safe refuge.

Both asylum seekers and refugees face many barriers to entering the U.S. today. The limit for the annual number of refugees went from 110,000 in fiscal year 2016 to just 18,000 for FY 2020. Asylum seekers experience extreme obstacles to entering the U.S.—they wait in Mexico for several weeks; are sent back to Mexico for months to live in cold tent camps and await a court hearing; lack good access to lawyers; face kidnapping, violence and exploitation in some Mexican cities; and confront numerous new legal obstacles in winning their asylum cases.

As you gather in warm, safe rooms with family this holiday season, consider adding Matthew 2 to your reading of the Christmas story. Reflect on the need for all of God’s people to find safety, to be with family and to flourish.

Then, take a minute to tell your members of Congress to welcome more asylum seekers and refugees into the U.S. (Also, if your governor is on this list, urge her or him to support refugee resettlement in your state.)