Several years ago, Emmanuel Sawa, then a high school student in the Plateau State of Nigeria, dropped out of school when violence caused his parents to lose their livelihood and become displaced along with many others in their community. Sawa, like many other young adults who either grew up in Plateau State or moved there to escape violence in other parts of the country, became addicted to drugs and was at risk of becoming radicalized.

Years of brutal localized conflicts and intense violence have displaced more than 2 million people and destroyed livelihoods. The humanitarian crisis is primarily a result of the decade-long fighting between Boko Haram militants and Nigeria’s military. The ongoing insecurity often prevents people from accessing life-saving assistance. Additionally, flooding has destroyed farmlands and crops that are a main source of food, increasing food insecurity.

Seeking to meet basic needs, hundreds of Nigerians continue to move from the northeastern part of Nigeria to Plateau State. Host communities there struggle with limited resources. Many have suffered their own traumatic experiences as a result of protracted local violence. 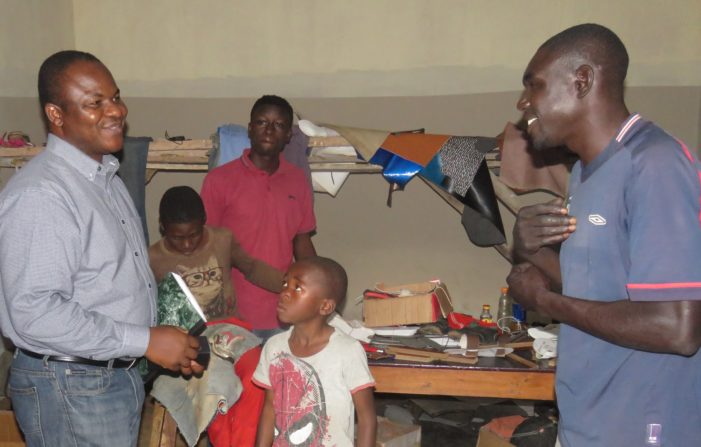 Charles Kwuelum (left) meets with Emmanuel Bala Sawa, a participant in an MCC-supported program that aims to reduce radicalization and perpetuation of violence in Jos, Nigeria. MCC Photo/William Gochin

Violence between farmers and herders in the state has left thousands without livelihoods and increased the rate of poverty. As was the case with Sawa, the violence has caused some children to drop out of school. The United Nations Children’s Fund (UNICEF) reports that “in Nigeria, about 10.5 million children are not in school even though primary education is officially free and compulsory.”

Many youth are unemployed and turn to drugs. A recent survey shows that in 2018 alone, nearly 14.3 million people were addicted to psychoactive drugs. The rates were especially high for young adults in particular states in Nigeria, including Plateau State.

The youth also become susceptible to violence. As the U.S. government continues to invest in a humanitarian response to Nigeria, the international community needs to mobilize efforts to rebuild lives of those affected in Plateau State. Countries must make robust investments in nonviolent peacebuilding programs, to prevent the increased radicalization of young adults.

Mennonite Central Committee (MCC) supports efforts by local organizations to reduce radicalization and the perpetuation of violence. In Plateau State, MCC supports the work of Center for Community Actions for Peace and Development (CCAPAD) to empower communities with the skills and capacity they need to build peace.

Recently, CCAPAD implemented a pilot project to address issues of drug abuse and youth radicalism through a program to reduce violent extremism. The program included skills training for 15 grassroots participants, Christians and Muslims, who were recommended by their community leaders.

Sawa was one of the young people selected. He and the other participants received training in how to make shoes and bags, using equipment provided by MCC. They also were able to meet with health care professionals, including mental health specialists, as well as faith leaders, entrepreneurs and financial professionals. The program aims to help the youth rebuild their lives, support each other and mentor younger ones through informal peace clubs.

You can support these efforts by giving to MCC’s peacebuilding projects and by encouraging your members of Congress to support foreign assistance.