At Christmas we recall the birth of baby Jesus many many years ago. Too often we forget—and certainly pop culture forgets or doesn’t know the beauty of the man who baby Jesus grew up to be. We focus on the surroundings of his birth: the dramatic story of his family’s last minute trip to Bethlehem for a census, not finding any decent overnight lodging, being forced to settle for shelter in a cave or stable for animals, snuggling a newborn in a manger, and angels announcing the birth to common shepherds.

Jesus of course grew up to be a loving and caring man who went about doing good, the Bible tells us in Acts 10:38. He spoke to crowds, fed them, healed the sick and reached out to outcasts. He had no use for religious hypocrisy and confronted leaders with no words minced. He took children on his knee and blessed them, took time to engage women in theological conversation (unheard of in those days) and didn’t worry about the religious rituals with stringent cleansing requirements for followers at that time. He ate with “sinners” and was criticized and questioned for it (Matthew 15).

Several months ago a seminary intern in our congregation, Rebekah, led a devotional for a meeting I participated in. That I still remember it three months later is an indicator of its impact, which is no mean feat. A devotional may move us at the time, and then we can’t recall it later. Indeed I don’t remember the specific Bible passage she used but it had stories like in the first chapter of the Gospel of Mark, such as Jesus’s compassion for a man afflicted with an evil spirit (probably a mental illness), touching a man with leprosy in order to cure him (also unheard of). Jesus was soon confronted by some teachers of the law ready to condemn him for ignoring religious laws. Rebekah had us write some descriptions on a folded up piece of paper, reflecting on the nature of the man Jesus as he went about his three years of ministry.

Then Rebekah had us take our folded paper (like a brochure) and write on the cover one word which described the ministry of Jesus—what he was like as a person. I chose the word compassion and wrote that on my cover. 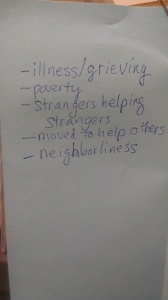 On the inside flap, she had us write a few words describing the characteristics we read or knew about Jesus that related to the word we’d written on the front. I wrote down: 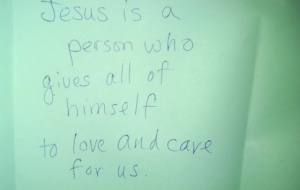 On the next panel she had us write a descriptive statement capsulizing Jesus in the Bible passage we’d read. I wrote: “Jesus is a person who gives all of himself to love and care for us.”

Have you met that kind of Jesus in the Bible and through the teachings and stories you’ve heard over the years?

Finally, Rebekah asked us to write on the last panel that same line we’d written about Jesus, but substituting the pronoun “I” in place of the name of Jesus in that sentence. So my sentence read: “I am a person who gives all of herself to love and care for others.”

I am still moved and challenged by the words of that sentence—which I in no way truly live up to, I will hasten to say. I’m almost embarrassed to share this statement here on the blog. Those who know me know it is not totally true. I am also self-centered and miserly at times. But the point of the exercise was to remind us how beloved we are in Christ, and that we are to aspire to be like the Jesus who walked on this earth over 2000 years ago. We are to be “little Christs” which is what the word Christian means.

Readers, I kept that little “brochure” we’d created as a reminder of this profound challenge: to live each day in the way Jesus demonstrated and taught—loving and caring for others.

That’s my Christmas story for this year, and I’m sticking to it! A blessed Christmas to one and all.

See also the section here on Third Way, Who is Jesus?

I’d love to hear about any special moment this Christmas when the story of Christ’s birth came to life for you.

Or a memorable devotional time you’ve had in a group, or personally.

Another Way is a column © by Melodie Davis, in syndication since 1987. Columns are generally posted at www.FindingHarmonyBlog.com a week after newspaper publication.

Melodie Davis is the author of nine books and has written the syndicated Another Way newspaper column since 1987. She is an editor and writer at MennoMedia/Herald Press and also writes a personal blog, www.FindingHarmonyBlog.com