Should the church take sides or stay neutral with the #BlackLivesMatter movement?

The movement and the presence of Jesus

Originally posted Nov 25, 2015 by Drew G. I. Hart on his blog Taking Jesus Seriously at ChristianCentury.org

The struggle has come near, so what should we do?

When is it the right time to take sides, standing with those that live with the daily threat of violence, suffering, and death? Who decides? In the midst of 400 years of white supremacist terrorism many Christian communities still do not want to take sides. Neutrality and the middle way has always been a tempting option for those not directly violated by the concrete death-dealing forces taking people’s lives away quickly through bullets on the street, as well as slowly through economic and social exclusion, the school to prison pipelines, and through psychological and cultural violence against black humanity and worth. Most white Christians, and many middle class racial minority communities, have cut themselves off from any intimate life together with poor black communities that struggle every day with a multiplicity of oppressive obstacles. But a movement is happening all around us.

The poor and oppressed are realizing that the kingdom of God belongs to them and they are now hungering and thirsting for our world to be set right. Many of those residing in the cracks of our society, whom have been ignored and stigmatized by American dominant culture, have immediately dropped everything because freedom called their name. They have nothing to lose so they are willing to accept the consequences that come with a clash with the establishment through nonviolent prophetic action. Called out from the patterns of our social order (white supremacy, dominant cultural respectability, economic idolatry, and the denigration of black humanity) people are gathering together to make their voices heard and then are scattering out to take the good news of a new movement back to their own communities.

Jesus, the crucified messiah of God

What many people do not realize is that Jesus is present in the movement. Jesus the Christ is most clearly recognizable through his solidarity with the crucified peoples of the world. For that reason, the apostle Paul insisted that he would center his message around Jesus as the anointed revolutionary of God that was crucified under Pontius Pilate and the Roman Empire. Jesus came preaching good news to the poor and liberation for the oppressed. Solidarity for him was always expressed for the excluded and vulnerable people he encountered as he travelled from village to village. When God’s people lost sight that the law was meant for the well-being of people, he confronted them. He also saw the ways that the religious, cultural, social, political, and economic establishment (that would be Jerusalem) no longer understood the things that make for shalom (the well-being of all people before God) and instead had become a den of crooks that further exploited those struggling to survive.

Therefore, Jesus engaged in a nonviolent action. His first demonstration was a public march to signal a new order had come. Then came a clash and confrontation with the establishment, including a disruption of the exploitative practices and a prophetic word rooted in Jeremiah’s own warning of God’s coming judgement. Next came the temple take over. No more business as usual while Jesus is in town. Jesus’ presence and teaching shut down the existing authorities who failed to live up to their calling. And because of the grassroots movement he was stirring up among the people, which pointed towards a new social order that emerged from the bottom up, the rulers conspired to have Jesus killed.

The Risen Presence of our Anointed One

The same Jesus that was born in humble Bethlehem, lived as the nonviolent messiah, crucified by the rulers of his day, and yet was resurrected, is now present today in our world. Kanye West was right about this one thing, Jesus walks. And Jesus is about that same revolutionary kingdom movement that he was about in the first century. And through the Spirit of God Jesus is present and among us. Jesus is present among the families that have lost loved ones because our society doesn’t recognize the value of black people because of our twisted white supremacist imaginations. Jesus is present with those that hunger and thirst for a society that doesn’t kill us for being ourselves. Jesus is present and is calling each and every one of us to drop everything and follow him, so that we might learn to love others like the good Samaritan did, no longer puppeted by our love limited by the boundaries of race, class, and gender.

Jesus has come near, and the center of his presence in our world is not a church building or even the sacrament. Jesus’ presence is centrally present in social marginality. It is an improvisational space where those on the margins negotiate life and death every day. The Spirit of Christ has come near and pleads with you to drop everything for the time of Jubilee has come. All things are set free and made new in the Jesus movement. And whether or not we can recognize our fractured Imago Dei as it relates to our white supremacist society and imagination, we need the healing and grace that only comes through following Jesus and abiding in his presence. Jesus is calling now. So the time for us to respond has always been now. Drop everything and run into solidarity with those called thugs, troublemakers, welfare queens, and niggers and when you get there, look for Jesus who has been waiting for your return and will celebrate your reunion with celebration. And that is good news.

Drew G. I. Hart is a PhD candidate in theology, part-time professor, writer, and activist with ten years of pastoral experience. He speaks regularly in churches, colleges, and conferences, and his first book Trouble I’ve Seen: Changing the Way the Church Views Racism (Herald Press, January 2016) makes antiracism theory and theology accessible in hopes of transforming our witness in society. He and his family live in Philadelphia. You can find him on twitter @DruHart and on his Facebook page, and his book will also be available on amazon. 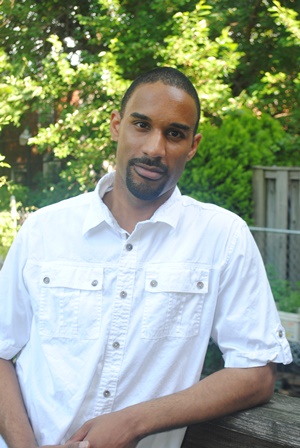 Drew G. I. Hart is a blogger, PhD candidate in theology and ethics at Lutheran Theological Seminary, part-time professor, and activist. He is the author of Trouble I've Seen: Changing the Way the Church Views Racism, to be published January 19, 2016.

More From Drew G. I. Hart