Climate change is affecting communities all around the world, including those in Nepal where Mennonite Central Committee has worked since the 1960s. According to Durga Sunchiuri, program coordinator for MCC in Nepal, the communities he works with have been facing many challenges recently due to the impacts of climate change.

Nepal’s geography is mostly mountainous. Families must use the steep terrain available to grow food for their household. Lower income groups tend to live closer to the riverbanks, making them more susceptible to flooding which has worsened with climate change.

In the past 15 years Nepal has experienced increased floods, particularly in the plains of southern Nepal (Tarai), and more landslides in the mountainous region of northern Nepal (Pahad). Farmers struggle to grow their food with the changing patterns of rainfall.

Sunchiuri described how parts of Nepal have “experienced heavy rainfall in the monsoon season, which used to start in June and continue until September but now has changed and keeps shifting. With the changes in rainfall the amount of food farmers produce and depend on has been reduced.” In addition to heavier rain in the monsoon season, there is the challenge of drought in the winter months.

MCC works with other nongovernmental organizations in Nepal to help small farmers in the mountains and plains areas cope with the more severe storms and droughts caused by climate change. Some programs help communities adapt by teaching sustainable farming techniques that use less water. Other programs focus on climate change mitigation projects such as tree planting, as trees absorb extra carbon dioxide in the atmosphere, which is one of the gases that increases global warming. Projects also equip farmers to use bio-based pesticides and fertilizers rather than chemical-based varieties.

“I have been impressed by the places where communities are doing really good work to move toward an eco-friendly environment,” Sunchiuri said. 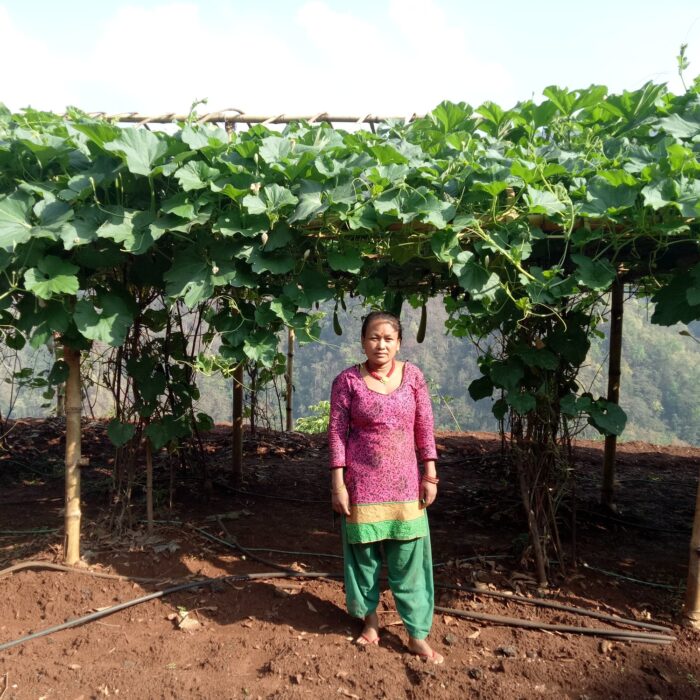 Sukumaya Ale Magar shows her plastic tunnel where she is growing a variety of gourds, tomatoes and other vegetables in Dhussa Village Development Committee in Dhading, Nepal. With support from MCC partner Shanti Nepal, Magar received materials to construct the tunnel and seeds for vegetable farming. Because water is scarce, she installed a drip irrigation system. Magar says she has increased her income since using this method of farming. MCC photo/Avash Karki.

“What I have heard and what I observed when I went to the U.S, was that the use of resources by the people is too high. I think p

eople can reduce the amount of resources they use daily. Also the amount of food people waste in the U.S is way too much. A lot of the production takes place in foreign countries. People need to think about the amount of energy it takes to bring that food to their table.”

According to the Bible, God created everything here on Earth and entrusted its care to humanity. As such, we have a responsibility to address the harmful effects of climate change that are already leading to suffering in many nations, including in the U.S.

Urge your members of Congress to support the U.S. rejoining the Paris climate accord, to implement federal government policies to reduce U.S. carbon emissions and to support foreign assistance programs such as the Green Climate Fund. If we unite together to address climate change, we can make a better future for upcoming generations.